The BorWin gamma topside has been successfully welded to its jacket by CTS Teams, a location 130km off the German shore, deep in the North Sea. This key milestone marks the completion of the critical hook-up phase during the massive offshore project that will deliver enough clean energy to over one million homes via the German national grid.

Constructed between 2014 and 2018 at DryDocks World in Dubai, and commanding half of its capacity, the 900MW HVDC converter platform began its voyage to where it would be united with its jacket in the North Sea back in September 2018, finally arriving in October 2018. During its journey the megastructure battled treacherous weather conditions and was delayed despite its impressive size as the sophisticated equipment and technology housed within the chassis demanded proper protection. Upon arrival, the BorWin gamma topside was installed utilising dynamic float-over methodology, a first for the method in the North Sea. Weighing a monumental 18,000 tonnes and heavier than Big Ben, the 6 legs were intelligently placed over the jacket’s main piles, commencing our vigilant hook up activities to secure the topside to its substructure. This critical and complex phase carried out by CTS teams was completed to exacting standards and to schedule while adhering to a multitude of HSEQ regulations, braving the winter in North Sea and safely fulfilling the contract with zero lost time injuries, a standard we maintain across all our projects. 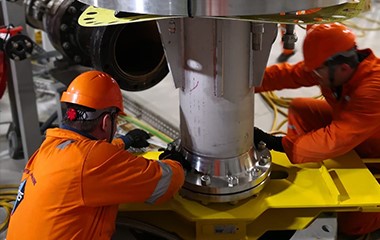 Set to convert AC from offshore windfarms to DC and transmitted by a 160km long cable for the German national grid, this pioneering project will set the tone for future constructions and importantly, pushes the needle closer to a world powered by clean energy.

This website uses cookies to improve your experience. A cookie is a small text file containing information that a website transfers to your computer’s hard disk for record-keeping purposes and allows us to analyse our site traffic patterns. It does not contain chocolate chips, you cannot eat it and there is no special hidden jar. We use these cookies, just to track visits to our website, we store no personal details, unless you provide them to us, using one of the forms on this website. By clicking on or navigating the site, you agree to allow us to collect information on and off this website through cookies. We'll assume you're ok with this, but you can opt-out if you wish - just visit our Privacy page for more details. Just click the Accept button to close this message.
CLOSE THIS MESSAGE
Privacy & Cookies Policy

Any cookies that may not be particularly necessary for the website to function and is used specifically to collect user personal data via analytics, ads, other embedded contents are termed as non-necessary cookies. It is mandatory to procure user consent prior to running these cookies on your website.